This research project explores situated interactions between residents of a North London neighbourhood. Working closely with Clapton Commons – a charity and ‘open network for neighbours’ – in concert with other local partner organisations, I have created a series of prompts intended to elicit conversations across the neighbourhood. Specifically, my intent is to trial design strategies that favour light, playful sense-making interactions to kindle new conversations between communities rarely in touch and centred on topics of consequence to both.

My search for appropriate methods alighted on cultural probes pioneered by Gaver, Dunne and Pacenti (1999). Their methods take on renewed significance as tools for contactless sociality since the constraints enforced by Covid-19 have continued to impact participatory strategies that employ face-to-face social contact. However, cultural probes have traditionally produced relationships that hand all the power to design researchers. I seek to use cultural probes as part of a participatory methodology that addresses this inequity.

I am a PhD candidate in the School of Communication with co-supervision in the Helen Hamlyn Centre for Design at the Royal College of Art. My practice-led research explores the ‘infrastructuring’ of open peer-driven design processes that nurture social commons. Situated within communities of place, I am experimenting with participatory methods leaders of communities can use to widen access for residents to participation in local social assets. An increased incidence of social interactions aims to foster conditions locally that can bring preventative mental health benefits.

Currently, however, our rights as humans do not extend to an environment or system that can keep us healthy. Our enshrined health rights are merely for health care – a protection that normally comes into effect when we are ill (United Nations 1948). Our approach to health is pathogenic – based on factors that cause disease. My research asks, what would happen to design if our approach to health is salutogenic (Antonovsky 1979) – based on factors that support health and wellbeing? More specifically, if our approach to mental health was preventative, how could design contribute to that?

Conversation: where critical friends of itinerant space are invited to comment on journal submissions as part of an ongoing research dialogue.

William Gaver, Anthony Dunne and Elena Pacenti argued in 1999 that their pioneering new research tools, cultural probes, created a space for exchange and dialogue where the deliberately playful was emphasised. With this innovation, Gaver et al. signalled their intent to pursue design for everyday pleasure (1999, 2004). However, in 2020, it is pertinent to reflect on this original intent and to perhaps ask: for whose pleasure?

The cultural probes method, if employed today in accordance with its pioneers’ original intentions, would function inequitably as a participatory design strategy for the following reasons:

These five points expose any present-day implementation of Gaver et als’ original cultural probes method to allegations that participants become mere unwitting pawns instrumental to highly extractive transactions. To be fair, power asymmetries in design processes were much more severe at the time the probes were developed. Gaver et al. created cultural probes to lure designers into early-stage design at a time when a relatively nascent field of design research practice was still seeking status in academic fields. Their transactional engagement with ‘users’ may be better understood in this context.

Learning taken from the original cultural probes example, is developed in my doctoral case-study – illustrated here. The aim is to experiment with a specific adaptation that corresponds with participant relationships of greater equality and authenticity. My study thus far, has found that by withdrawing the design researcher (myself) to a position of facilitator leaves a ‘space of possibilities’ (Manzini 2017) in which two communities could begin an open-ended conversation. In this case, a dialogue between primary school students and elders living close-by in retirement housing physically distanced during a global pandemic. The results were noted by participants as ‘welcomed exchanges’ that ultimately would support the wellbeing of both parties at a time when our physical connections with each other are under threat.

Inspired by Gaver et al., I will also be “pursuing design for everyday pleasure” (2004), but deploying pleasure as a social commons, a resource which can be enjoyed by all parties, moving beyond design research that serves designers only.

Image caption
Students were given a blank greetings card with a sound module inside it with which to make contact with elders nearby isolated as a result of Covid lockdown. Students recorded personal voice messages and used graphic decoration to introduce themselves and enquire as to how elders were coping with lockdown. Keeping these, elders then responded back to students, in the same way, using blank greetings cards with sound modules inside. 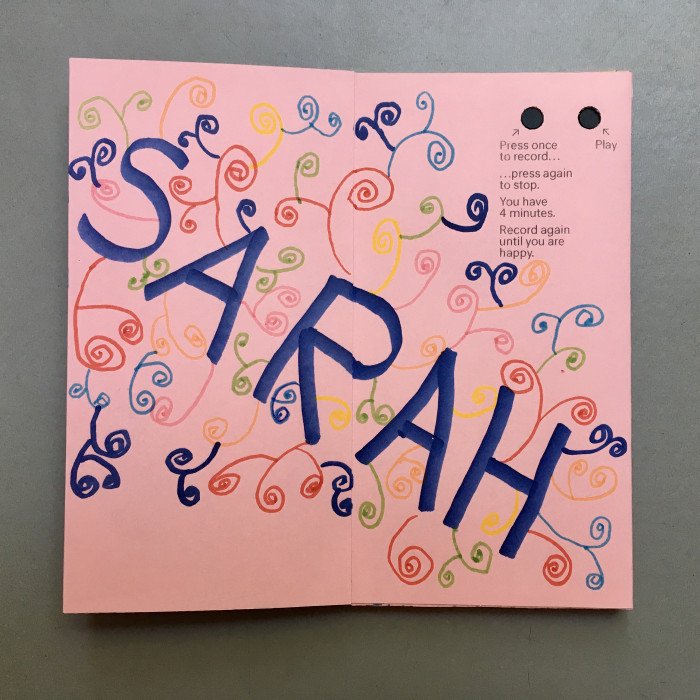