I posit that contemporary 2D advertising broadcasts secondary messaging that re-enforces colonial concepts such as racial and class inequality and a neoliberal ideology that supports a ruling class (Jones 2018). That is why my current research asks, Can the advertising process be decolonized in order to remove racist messaging?

The artistic practice presented in this journal aims to explore a solution to decolonise advertising by what Mignolo calls ‘delinking knowledge.’ A workshop using ‘decolonised research methodologies’ was held with local peoples at a cultural centre in Iguala, Mexico, and the concepts produced are subverted by appropriating the détournement theory of the Situationist International to create 2D communications using cultural codes & signs designed through decolonized tools and techniques.

This research through artistic practice demonstrates that by focusing on one part of the creation process, advertising can be decolonised one step at a time, and from the bottom up.

Carl W. Jones is a PhD Candidate in the RCA School of Communication and a Senior Lecturer in PR & Advertising at the University of Westminster. His research is on “Decolonizing Advertising,” sets out to redefine the concept of advertising through his analysis of the political economy of race in Mexico, and its manifestation through the spectacle of advertising.

Semiotics is Carl’s preferred method to investigate meaning in visual communication, both digital and analogue. While presenting seminars internationally to audiences exemplified by those of Clio’s Asia, Marketing Magazine Toronto, El Ojo Buenos Aires, as well as within the academic sphere, Carl has been interviewed by the BBC, The Telegraph, BBC Mundo: Periodico Reforma, TV.UNAM, on the effects of publicity on society. He has won numerous awards and recognitions for his creative work, including Cannes Lions, and his newspaper articles on Racism & Classism in Mexican advertising have been shared widely on social media.

Carl served as issue editor for “Advertising for the Human Good”, Volume 15, Issue 2 of academic journal Westminster Papers in Communication and Culture (WPCC). His papers on: Branding, Design, Digital Gaze, Advertising Tools & Techniques, have been presented at global conferences and published in a variety of languages in Europe and Latin America. In addition, he uses “Art Through Research” as a method to investigate and create subversive artworks. His pieces have been exhibited in galleries and museums in Mexico City, Toronto, Dubai, London, and others and collected by the ‘Fundacion Televisa Art Collection’ an important collection of works in Latin America.

Conversation: where critical friends of itinerant space are invited to comment on journal submissions as part of an ongoing research dialogue.

Decolonising advertising is not simply resolved through diversity and inclusion. The whole process needs to be examined by questioning every rule and regulation and investigating all stages of the advertising process from ‘briefing’ to ‘broadcasting’ and everything in-between.

This research focuses on one small part of the process by examining the tools and techniques used to create the cultural codes within 2D advertising messages in Mexico City, broadcast in three different social economic neighbourhoods. The tools and techniques are defined through semiotic & design theory including Barthes, Danesi, Van Leeuwen, and Dare.

The ‘work in progress’ artistic practice presented in this journal aims to explore a solution to decolonize advertising by what Mignolo terms ‘delinking knowledge.’  This was achieved by holding a workshop using ‘decolonised research methodologies’ of ‘co-production’ and ‘Indigenizing’ (Smith) with local peoples at a cultural centre in Iguala, Mexico. The concepts produced were subverted by appropriating the détournement theory of the Situationist International, and these ‘texts’ will be used in a future workshop as prompts with members of the advertising community to inspire a ‘decolonial’ conversation.

The resulting discourse will allow the consumer to resist the racist ‘spectacle’ (Debord), and persuade the Mexican ad industry to question the processes used to generate advertising that re-enforce colonial concepts such as racial and class inequality and a neoliberal ideology that supports a ruling class.

Decolonised methods practiced in this research can now be applied to other parts of the strategic and design process to remove colonial thinking from advertising by ‘de-linking’ the rules, regulations and processes.

This research through ‘artistic practice’ demonstrates that by focusing on one part of the process, advertising can be decolonized one step at a time, and from the bottom up.

Image Caption: Tostadas $10 pesos’ is the translation of the handwritten poster, which is a typical example of signage created by the Lower Social Economic Levels to advertise goods and services to their consumers. Photo by Carl W. Jones 2018 with iPhone 7 in Mexico City.

Danesi, M. (2007) The Quest for meaning. A guide to semiotic theory and practice. Toronto. University of Toronto Press.

Mignolo, Walter. (1995). The Darker Side of the Renaissance: Literacy, Territoriality, and Colonization. University of Michigan Press. 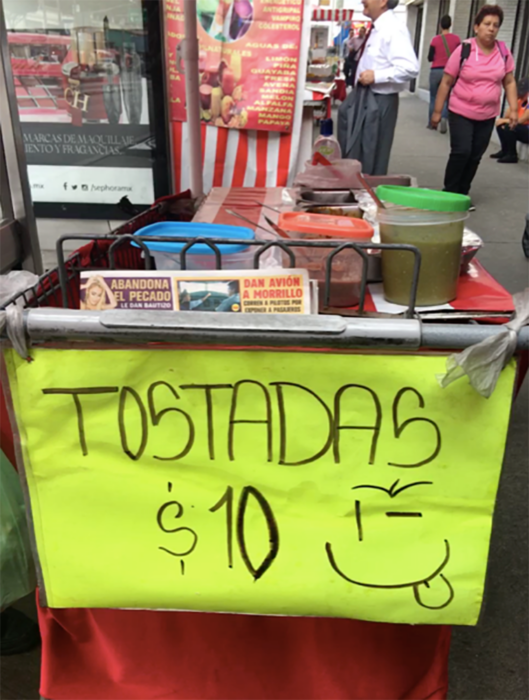