Lumia was an experimental art form that emerged in the interwar period in the United States using light as the sole medium of expression. Single-handedly, Thomas Wilfred (1889-1968) pioneered and explored it very extensively. However, despite Wilfred’s lifelong devotion, Lumia survived only as a technique and style, failing to establish it in a form of synthesis. As part of my PhD research on the art of Lumia, I have developed two new concepts: Void Axis and Un-site. With these two concepts, I situate Lumia among other forms of modern and contemporary arts but also join in a phenomenological discussion on light that I reviewed in Phenomenology of Perception (Merleau-Ponty, 1945) and Notes toward a Conditional Art (Irwin and Simms, 2011).

My name is Trent Kim and I am a Glasgow-based South Korean born Scottish artist. I was trained in theatre lighting design and art-based research, and I am most interested in the medium of light and researching how lighting reveals the world to us.

I am currently a part-time PhD student at Royal College of Art revisiting the art of Lumia by Thomas Wilfred (1889-1968) through the lens of practice. I am critically re-enacting the early 20th-century artist’s prototyping. I term this particular type of prototyping ‘mythopoetic prototyping.’

When I was studying theatre lighting at the Royal Scottish Academy of Music and Drama, I got into a lengthy debate with my research supervisor, Francis Reid (1931-2016) on whether light is visible and we had to agree to disagree, but the same question re-emerged in my current PhD research.

Merleau-Ponty suggested that ‘lighting and reflections only play their role if they fade into background as discreet intermediaries, and if they direct our gaze rather than arresting it’ and by directing our view instead of ‘arresting it’ (Merleau-Ponty, 1945, p.323). He also described that ‘L[l]ighting is in itself neither color, nor even light, it is prior to the distinction between colors and lights,’ and referred to this state as ‘neutral’ (Merleau-Ponty, 1945, p.324). However, I would argue that Merleau-Ponty’s observation on lighting was limited to a ‘logic of illumination’ within the logic of ‘painting or the spectacle, an experience of coherence between colors, spatial forms, and the sense of the object’ (Merleau-Ponty, 1945, p.326). In other words, Merleau-Ponty examined lighting within the site, not within the void, the counter-site to the site. The similar limitation was seen in the concept of ‘conditional art’ developed by Robert Irwin (b.1928).

Irwin is a contemporary installation artist, known for his contribution to the Light and Space movement. ‘Conditional art’ was concerned with the relationship between site and art. Irwin’s phenomenological approach emphasised in ‘being and circumstance’ that there should be neither ‘transcendent criteria (truths)’ nor ‘grounds for predetermining (preplanning) its actions’ (2011, p.215).

In contrast, Thomas Wilfred observed a new method of abstraction through lighting and described its expression as ‘abstract human.’ The following conversation is an excerpt from Wilfred’s radio interview with Patricia Marx in 1968.

Thomas Wilfred:
…you can in this art form [Lumia] express abstract human.

Thomas Wilfred:
In a form that does not involve the human being whatever and I have worked some with it in the past and it promises well.

Patricia Marx:
How do you actually do that? What… can you verbalise it a little?

Thomas Wilfred:
Yes, you do it by a sudden, unexpected movements of smaller forms.

Moving image of Thomas Wilfred’s Lumia was only ‘sudden’ and ‘unexpected’ when measured by the logic of illumination from the perspective of painting. But, when focused on the reflection of light, the image reveals ‘Void Axis.’

Noun: a relay network that is revealed by a single continuous material, for example, a string, a directional sound, a beam of light and so on.

A technical comparison between a standard digital video projector and a Lumia instrument (aka ‘Clavilux’ in Thomas Wilfred’s Lumia) can help understand the cause of Void Axis. The primary function of a standard image/video projector is to project a clear image through light so its use of lenses is to achieve a clear focus. In contrast, Wilfred’s Clavilux was built to reflect light within the containment before releasing the beam to project an image. This exit-image from the Clavilux was not a representation of a preconceived image but a representation of a three-dimensional space (void) visualised by how the beam travelled inside. It is three-dimensional but fundamentally different to a representation of three-dimensional architecture/site which an x-ray or a wireframe of an architectural drawing visualises.

Verb: to see out-with an immediate site
Noun: a visible space but only by subversive seeing

Wilfred’s use of reflection of light in Lumia should be considered as an act of ‘un-site’. This is because the void that Wilfred’s Lumia revealed only became acknowledged and understood when the act was recognised. Without becoming aware of ‘void axis’ and ‘un-site’, Wilfred’s moving image would remain ‘sudden’ and ‘unexpected’ to spectators.

Interpretations of Void Axis and Un-site outside Lumia

Void axis, that Wilfred’s Lumia relies on, is medium-specific by lighting, and its methods of un-site can vary. By way of interpretation of void axis and un-site, here are my short observations on Spiegel im spiegel by Arvo Pärt (1978) and In Silence by Chiharu Shiota (2011).

Spiegel im spiegel by Arvo Pärt (1978) is a beautiful piece of musical composition that reveals its un-site through a solo piano and violin. The slow arpeggio (playing notes in a chord in succession) magnifies and crafts decays between notes and the subtle chord changes animate the un-site over time.

Chiharu Shiota’s In Silence (2011) is another example. Shiota provides a visual anchorage with a burnt grand piano and uses black wool to visualise the un-site of the site. Presenting the piano in the ‘burnt’ state acts as a subversion to encourage spectators to see the un-site.

In my current PhD research, I argue that Thomas Wilfred’s Lumia pioneered a new method of subversion in producing moving images through light. I propose that Lumia is not an obscure kinetic abstraction but an image production technique that visualises the void beyond the conventional definition of site in arts.

Wilfred’s Clavilux Junior Unit #86 (lower part of the image), the angle of the bulb was not directed towards the metal tube but 90 degree tilted. This means as soon as the beam passed through the mechanical colour wheel, it would hit an internal surface of the tube, reflect and refract. To maximise the number of reflections and refractions, the tube was bicone shaped and featured multiple dents. As a result of the unconventional construction, Clavilux Junior produced a kinetic light image (upper part of the image) that would require the void axis to make sense of it. 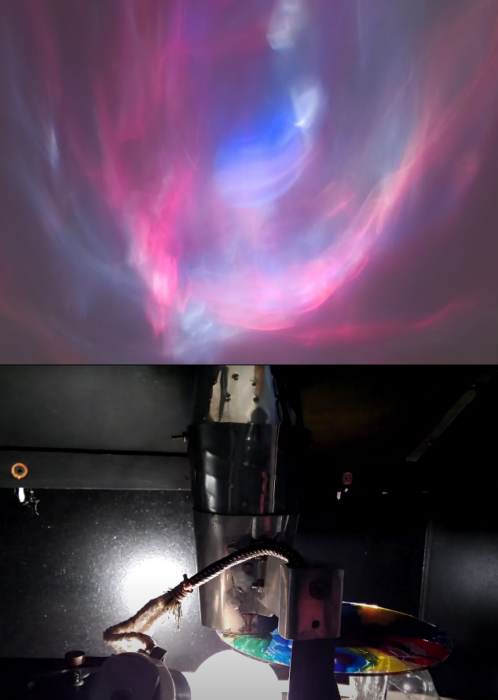